What does the community around eSports mean to you? What sets it apart from traditional sports?

You'd be hard pressed to find anyone who isn't a fan of sports nowadays. But when the word "sports" come to mind, we typically think of games like football, tennis and hockey, and not professional video gaming. eSports has become a growing trend, taking stage at major venues and even being broadcasted on ESPN. We wanted to see what makes eSports so special. What's the community like? Our main question we asked was "What does the community around eSports mean to you?"

We interviewed four different members of the Royal Family, each with a unique role within the organization as well as the eSports community in general, each provided a different perspective on the community and what made the community great.

The Atlanta Homestand After Party

This was the first event we attended, and it was more of a celebration of an event held earlier that day, called the Atlanta Homestand. During the Homestand, a series of Overwatch matches were played live at the Cobb Energy Center in the northwest Atlanta area. Tickets were low in supply and were going for a minimum of $150 on the aftermarket, so going to the After Party at Battle and Brew in Sandy Springs was a more affordable option.

The Atlanta Reign vs. The Huangzhou Spark Watch Party

This time, we were at a real watch party. All of the TVs were fixed onto the gamer-focused streaming platform, Twitch.tv, and fans dressed in jerseys for the Atlanta Reign were all gathered around the seating areas, watching re-broadcasts of past games before the match began or were simply just engaging in conversation.
Since the matches hadn't started yet, we actually were able to speak with Leo, the organizer of the Atlanta Royal Family. He was happy to have a chat and set us up with two other members of the Royal Family, Val and Ryan. We all set out to the porch area of Battle and Brew 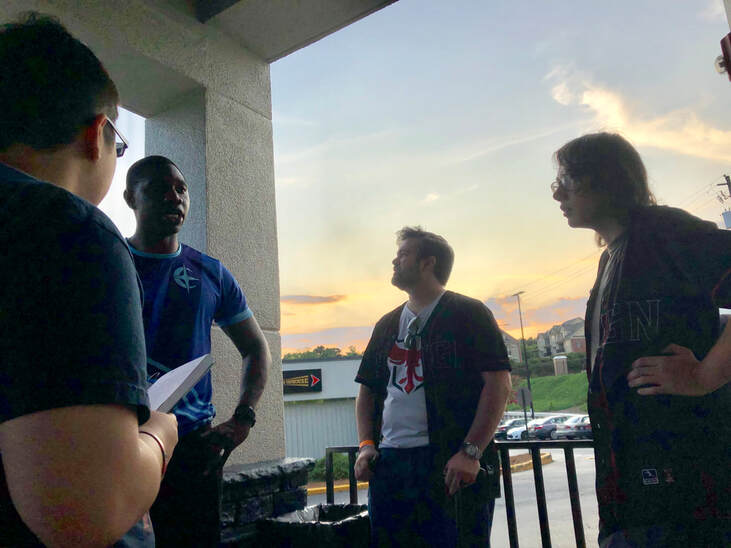 pictured from left to right (myself, Ryan, Leo and Val)
Ryan helps run a podcast called the "Bird Watchers", which is dedicated to analyzing and talking about the Atlanta Reign and other notable plays and events in the Overwatch League. He's a general lover of sports, especially the local teams. He got into eSports in the early 2000s, by following and playing the hit first person shooter game, Halo. His mom was actually pretty supportive of his involvement in eSports because even though he also enjoyed playing in physical sports, he didn't risk the injury that contact sports players would get.
Val was actually a friend of Kendra's, and part of how she got involved in the Overwatch community. He had been into eSports before Overwatch got its own league. He had followed players from other games and other tournaments in general. He felt that part of what helped the Overwatch eSports community really grow, was the Overwatch League's Decision to localize teams. In the past, teams were just named after their organizations. This would end up giving eSports the same sense of "hometown pride" like fans of traditional sports.

The Atlanta Royal Family proved to us that the community around eSports and gaming in general is multi-faceted, and can truly strengthen existing bonds (friendships, romantic relationships, etc), provide a safe and accepting space for people, and give a sense of belonging to a bigger community. Not only were the members of the Royal Family passionate about the Atlanta Reign and Overwatch in general, but they also have relationships with the players of the Atlanta Reign, something completely unique to the eSports community. Overall, everyone we had the pleasure of speaking with shared the same sentiments that eSports is going to continue getting bigger, and the accepting community will help foster that growth.
You can read the full ethnographic report here!